11 days to the Ekiti Governorship Election: Voter Inducement Persists while questions remain around the allocation of Voters to new Polling Units lingers

In exactly 11 days’ time, the residents of Ekiti State will go out to vote in what is likely to be another highly competitive election. The election will be the first election to be conducted under the Electoral Act 2022 and the second state-wide election to be conducted using the Bimodal Voter Accreditation System (BVAS). Thus, the Ekiti election will serve as a testing ground for assessing INECs preparedness for the 2023 general election. It also presents an opportunity to assess the implementation of the new Electoral Act and the efficacy of the policies, processes and innovations introduced by INEC especially its ability to adapt learnings from recent elections. This election will also be a litmus test to assess the role of security agencies in the election, and the commitment of political parties’ to electoral integrity, stakeholder engagement and citizen participation, especially with the dynamics of the current politics of the 2023 General elections.

For the Ekiti state governorship election, Yiaga Africa deployed long term observers to observe the pre-election environment. The finding in the pre-election phase indicates that the Independent National Electoral Commission (INEC) remains consistent in implementing its preparatory activities in line with its Election timetable. This includes the training of personnel for the election,  the deployment of materials and the collection of the ongoing Permanent Voters Card (PVC). In addition, the commission conducted a mock accreditation in selected local government areas and polling units in the state using Bimodal Voter Accreditation System (BVAS). According to INEC, the purpose of the mock accreditation was to test the functionality of the BVAS technology and build confidence in the voters. The commission also increased the number of polling units in the states, to improve accessibility of voters to polling units.  However, conerns have emerged with the allocation of voters to the new polling units created by INEC.

The Ekiti governorship election has so far witnessed an increase in money politics as the big spenders dole out cash in a supposed “door to door” campaigns, practice now becoming commonplace in Nigeria’s election. With the elections happening alongside the primaries for the 2023 general election, the politics in the Governorship elections are riding on negotiations and renegotiations for political positions within party structures and at an inter-party level. As observed in this pre-election phase, the election is projected as a three-horse race with the Social Democratic Party (SDP) rising in its prominence in the state in competition with the All Progressives Congress (APC) and Peoples Democratic Party (PDP) for the Governorship seat in this campaign phase. The observation indicates that amongst the parties contesting, the APC, PDP and SDP have campaigns ongoing in each of the 16 local government areas (LGAs). Interactions with stakeholders and engagement within the state indicate that the June 18 governorship election will be one determined by money- visible in the level and frequency of voter inducement/vote-buying and personality contest.

Yiaga Africa WTV LTOs have continued to observe election preparatory activities undertaken by INEC across the 16 Local Government Areas (LGA) of Ekiti state. This includes the collection of PVC which is still ongoing at INEC LGA offices. Some other preparatory activities conducted by INEC include the public launch and release of the Electronic Voter Register to the representatives of the political parties on May 18, 2022. The data from the voter register has revealed that 988, 923 voters are expected to vote in the election, with more women registered to vote at 51%. Young voters between the ages of 18-34 constitute 38.56% of the voters in Ekiti state. With women making up over 50% of the registered voters, the women in Ekiti have the power to determine the outcome of the election.

INEC has also commenced its training of Ad hoc officials in the state for the election. Other training training of representatives of the rank and file of the Nigeria Police and other security agencies in the state on understanding the new electoral act, their role in the electoral process as well as their professional ethics.

As observed by Yiaga Africa’s LTO, INEC conducted a mock accreditation of voters in Ekiti state to test the functionality of the Bimodal Voter Accreditation System (BVAS) that will be deployed for the governorship election in the state. The exercise was conducted on Monday, May 30th, 2022, in 12 PUs spanning six local government areas (LGAs) (Ado Ekiti, Ekiti South West, Ikere, Ifelodun/Irepodun, Ido-Osi, and One). While the process appeared to be seamless, citizen participation was low. This is reportedly owing to the inadequate publicity by the Commission. For instance, as at 2 p.m only 5 people had approached INEC officials for the mock accreditation at Ado ‘J’ Okesa Opposite High Court /GRA, Police I, while in Ado ‘J’ Okesa Set Mango Area / G. R. A., Police II only 20 participated in the exercise.

The WTV LTOs observed and reported notable voter education/information as conducted by INEC, NOA and some CSOs. The majority of the voter education observed was through the medium of workshops, voter sensitisation programs, posters, social media, jingles, and TV and radio programs. Workshops, voter sensitisation events, posters, social media, jingles, and TV and radio shows accounted for the majority of voter education observed. The majority of the voter education/information content focused on PVC collection, election day procedures, and messages encouraging a peaceful and violence-free election across the 16 LGAs of Ekiti State. However, there were few LGA’s were voter information campaigns were not observed. These are:

Voter information campaigns targeting the youth were not witnessed/heard of in Ekiti South-West, Ekiti West, Ijero, Ilejemeje, Irepodun/Ifelodun and Oye LGAs of the state.

Yiaga Africa pre-election observation indicated that the “door-to-door” campaigns have become the trend and preferred style of the campaign for candidates/parties as they move from street to street, “door to door” engaging with prospective eligible voters. In addition, candidates/parties also made use of media adverts and jingles on the TV and Radio and few party campaign rallies.

WTV LTOs reported that palliatives in all forms of voter inducement like offering free fuel for okada riders, money as high as N20,000 in some cases given to people during town hall meetings, distribution of sewing machines, generators, motorcycles by the APC, PDP & SDP in Efon, Ekiti South West, Ekiti West, Gbonyin, Ido/Osi, Ijero Ikere and Ilejemeje LGA. What is perceived to be an offshoot of the “door to door” is the susceptibility of citizens to voter inducement, it was reported that on the spot transfers of up to N10, 000 were processed by those carrying out their “door to door” campaigns.

At the INEC office in Ise/Orun LGA WTV LTO witnessed some INEC officials fast-tracking the PVC collection process for those who are able to pay the sum of N500, while others are left unattended for hours or told to come back the day after to collect their PVCs.

WTV LTO reported physical violence in Ayetoro town, Ido-Osi LGA on the 19th of May leading to the deployment of police to the town to address the issue.

Learn more about #WatchingTheVote at www.watchingthevote.org  or on social media on Facebook at facebook.com/yiaga.org or on Twitter @YIAGA.

Yiaga Africa #WatchingTheVote deployed 25 Long-Term Observers (LTOs) to all the 16 Local Government Areas (LGAs) of Ekiti State to gather systematic information about the pre-election environment, including early warning electoral violence signs. To achieve this, Yiaga Africa LTOs are equipped with a checklist to observe and report on the electoral and political environment in the state. All Yiaga Africa WTV LTOs are recruited from their local government areas of residence to observe the electoral activities relating to voter education, political campaign activities, activities of marginalised groups (youth, women, and people living with disabilities) and election-related violence in the pre-election period. Their reports cover activities of the Independent National Electoral Commission (INEC), civil society organisations, political parties, the National Orientation Agency (NOA), and women and youth groups. The observers report on their observation findings on a bi-weekly basis via coded text messages to a Yiaga Africa WTV Database. Within reporting timeframes, observers also report on early warning signs and critical incidents demanding urgent attention as soon as they happen. The reports are compiled and shared with relevant election stakeholders for the needed response.

Yiaga Africa WTV PREO observation findings are not statistically representative of the entire state but indicate emerging trends during the pre-election period. Unlike the WTV Election Day observation methodology, Yiaga Africa does not rely on sample-based observation to carry out its PREO observation. This report covers the period between May 13 to May 26, 2022. Yiaga Africa, therefore, encourages users of this report to independently corroborate and respond appropriately to trends identified in this report. 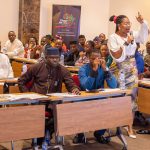