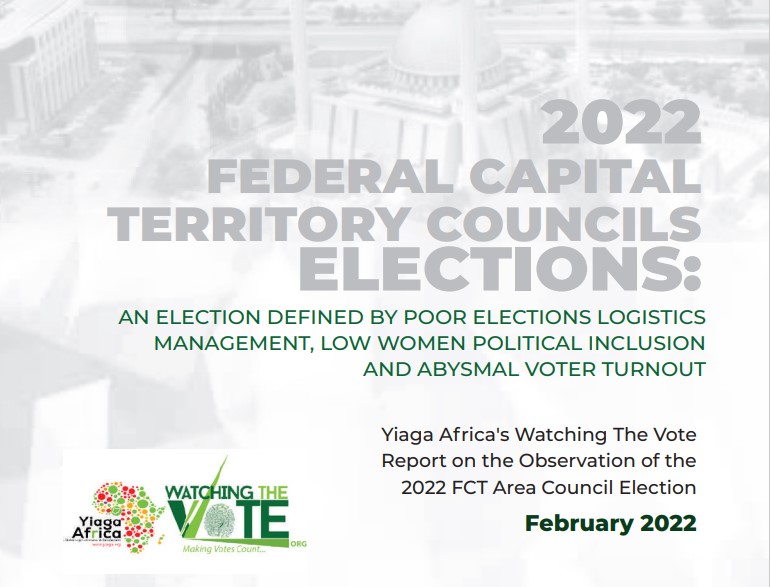 Held on February 12, 2022, The FCT Area council election was the first to be organized by the Independent National Electoral Commission (INEC) in the year. Unlike in the 36 states where state electoral commissions organize the council elections, the FCT Area council elections are statutorily conducted by INEC. 68 elective positions were contested by 14 political parties, six for chairmanship and 62 for councillors. There were high expectations for improved and flawless election administration and management going into the elections, but this was not to be as the election was bedevilled by many of the challenges that characterized the conduct of some past elections. The FCT Area Council election was fraught with shortcomings and infractions which include late deployment of election materials, poor distribution of PWD assistive materials, uneven allocation of voters to polling units and malfunctioning of the bimodal voter accreditation system (BVAS). Yiaga Africa considers these challenges a rollback in the quality of election day administration.

Similar to the findings from previous FCT elections and based on trends observed in the pre-election environment, Yiaga Africa had predicted an abysmally low voter turnout in the election, which was manifestly so. With 1,373,492 registered voters in the FCT as of February 2022, it was gathered that just less than 100, 000 registered voters turnout to vote on election day showing barely a 10% turnout estimate. For instance, the Abuja Municipal Area Council recorded a 5.09 % turnout for its Chairmanship election despite being the most viable and richest amongst the Area Council. Such a level of apathy as we witnessed in the FCT elections endangers democracy because it allows elective office holders to exercise their powers with little sense of responsibility to the electorate. It also exposes the civil regime to threats from powerful social interests who might wish to undermine its development into democratic governance. There is a well-founded conviction that following the effects of political apathy, neither the views of the people nor their actions matter any longer in determining the use and exercise of political/economic powers or the outcome therefrom.

The FCT Area Council election was no doubt an illusion of an Inclusive and Participatory Election as it was defined by poor women's political participation, operational deficiencies, election security challenges, and abysmal voter turnout. The pre-election environment and preparatory activities by some election stakeholders did not inspire the best confidence in citizens' participation.

Political parties as key actors in the process had little or no time to conduct credible party primaries due to the tight timeline between the notice of the election (31st March 2021 and the completion of party primaries (24th April 2021). This is not unconnected to the poor participation of young people, Women and People with Disability in the electoral process as the candidate nomination process is bereft of transparency or credibility. Thus as an election that is expected to be the closest to the people, there is no doubt a need to build a sustainable electoral system at the local level that will inspire and boost citizens' confidence to take the lead in electing responsible and responsive leaders who will respond to the yearnings and aspirations of the average citizens at the grassroots level.