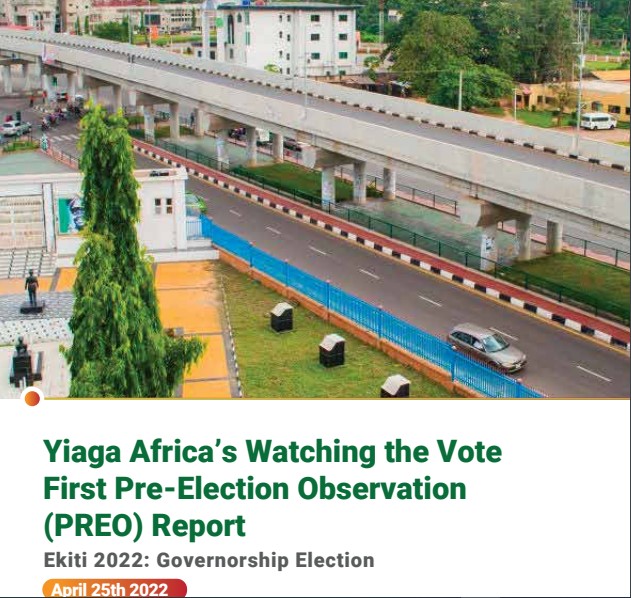 The 2022 Ekiti state governorship election will be the first state-wide election to be conducted post the passage of the Electoral Act 2022 and will serve as a litmus test in assessing the implementation of key provisions of the new Act. The political significance of the Ekiti elections goes beyond the operationalisation of the new Electoral Act to other political dynamics and socio-economic factors which will influence the conduct of the election. First, the Ekiti Election often serves as a testing ground for assessing INECs preparedness for the general election; the 2023 general election. It presents an opportunity to assess the efficacy of the policies, processes and innovations introduced by INEC and identify the areas for improvement. Secondly, both the All Progressives Congress (APC) and the Peoples Democratic Party (PDP) will be going into the election with a new party leadership after the successful conduct of their party convention; PDP in 2021 and APC in 2022. Thirdly, the Ekiti Election activities are being implemented alongside activities of the general election, like the candidate nomination process. Also important is the persisting insecurity in the country and the increasing level of poverty and inflation in the country. These factors may likely impact on the conduct of the elections and present important dynamics to consider in the planning for the elections.

As the Ekiti gubernatorial elections on June 18, 2022 draw closer, the contest will be among the new breed of politicians emerging from the party primaries who have support from the camp of the former governors. Based on the candidates list released by the Electoral Commission, a total of 16 parties and 16 candidates will be contesting. There will be 2 female candidates while 1 candidate is under 40 years old (Find the breakdown in Appendix 1). The pre-election observation indicates a possible competition between the APC, PDP and Social Democratic Party (SDP). The INEC data on voters for Ekiti state indicates that as of 21 March 2022, 124, 797  new voters were registered in Ekiti state during the continuous voter registration exercise that was concluded in March 2022. In 2019 Ekiti state had a total of 909, 696 registered voters, projecting a possible increase in the number of registered voters to 1,034, 493 voters. For the election, INEC released a 14 activity calendar and has so far achieved 10 of the 14 activities. In addition, the Commission has added new polling units to increase the number of polling units from 2195 to 2445 polling units in the State. Ongoing preparatory activities by INEC in the state include the commencement of the sensitization for citizens, meetings with relevant stakeholders and the completion of the deployment of non-sensitive materials to the Registration Area Centers (RACs) in the State.

Yiaga Africa's Pre-Election Observation (PREO) report captures activities of the key election stakeholders: INEC, Political parties, Civil Society Organisations (CSOs), and the National Orientation Agency (NOA), as well as indicators of electoral violence. The next section contains the key findings of the first observation period (between March 24 and April 7, 2022). Yiaga Africa’s Watching the Vote currently has its trained Long term observers (LTO) deployed in the 16 LGAs until June 15, 2021. Reports of the observation findings will be shared mostly on a bi-weekly basis.