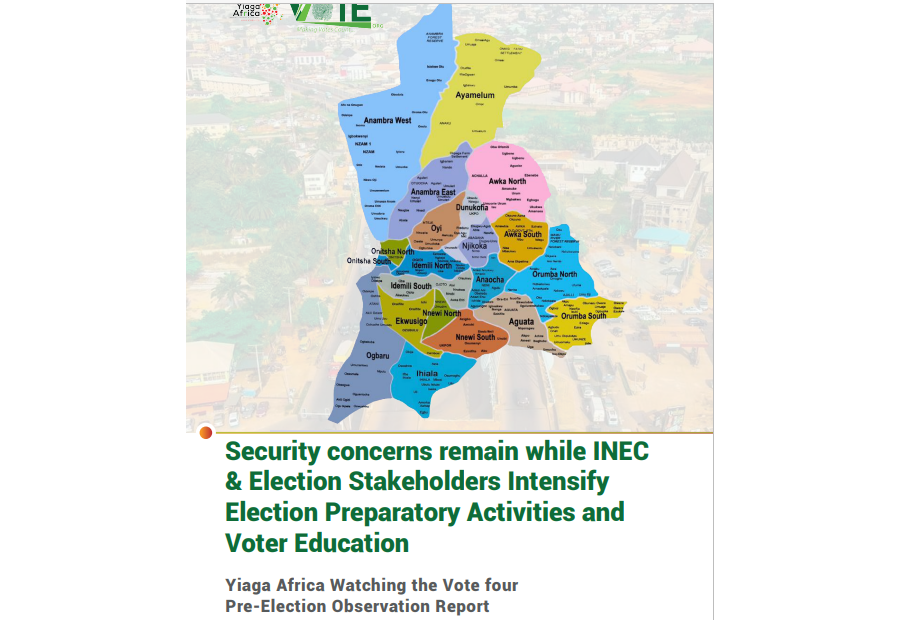 Yiaga Africa’s pre-election observation efforts in the fourth reporting period focused on three (3) emerging trends that are likely to impact the conduct of the election. These include election preparatory activities by stakeholders, election violence or threats of violence and violations of the electoral code of conduct. The findings for this period highlight an increase in election preparatory activities by the Independent National Electoral Commission (INEC) and a shift in the level of voter education and information campaigns. Reports from WTV observers revealed that voter information campaigns were conducted in 14 of the 21 local government areas, the reports also indicated that there were voter information campaigns targeted at the marginalized communities (women, youths, and persons with disabilities) across most of the LGAs in Anambra.

With about 8 days to the Anambra Governorship election, election stakeholders have continued to show determination to ensure credible and peaceful conduct of the election.  INEC had on Monday, October 25, 2021, convened a meeting of the Inter-Agency Consultative Committee on Election Security (ICCES) on the Anambra Governorship election. During the meeting, the Chairman of the Commission, Prof. Mahmood Yakubu stated that the security agencies have assured INEC of a secured environment for the election. He further reaffirmed the commission’s confidence in the security agencies to ensure a safe election. This was also confirmed by the State’s Commissioner of Police; Echeng Oworo Echeng, who in a meeting with the members of the Yiaga Africa' Watching the Vote, stated that the Police remains committed to protecting election stakeholders and voters ahead of and during the November 6, governorship election.

There however remain critical security concerns with the recent threats by secessionist groups to shut down the region if certain conditions are not met. This remains a major threat to the election as elections continue to draw nearer. The current volatility of the state has continued to hinder political party campaigns, voter education and mobilization as stakeholders continue to deploy more caution. For instance, political parties have resorted to campaign strategies like campaigns at close-door locations, media adverts rather than their traditional outdoor rallies and campaign trails. This has widened the existing gap between candidates and prospective voters especially because the avenues for engaging candidates and parties on the agenda is almost non-existent. In addition, is the current rise in the activities of suspected cult groups in the state which is also likely to increase the threat to security in the state.

We commend INEC for its efforts to ensure the collection of old Permanent Voters Cards (PVC) from previous registration exercises. However, Yiaga Africa is worried that, with less than 8 days to the elections, the Commission is yet to commence the collection of PVC for the 76,104 new eligible voters who recently got registered during the Continuous Voters Registration (CVR) in the state. This, if not addressed, could potentially disenfranchise eligible voters.

Yiaga Africa has a total of 26 Long Term Observers (LTOs) deployed in the 21 Local Government Areas in Anambra state, to observe the pre-election environment.  This report is the fourth pre-election observation report to be issued; it reflects the findings between October 8 to October 21, 2021. The findings in the report cover the 21 LGAs in Anambra state.