An Election Amidst Fear and Uncertainties – Yiaga Africa Chronicles of the 6 November 2021, Anambra Governorship Election 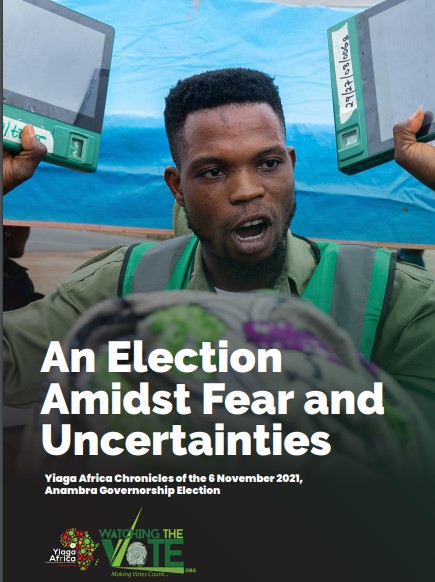 An Election Amidst Fear and Uncertainties - Yiaga Africa Chronicles of the 6 November 2021, Anambra Governorship Election

The Anambra Governorship election is one of the 8th off-cycle governorship elections outside the conventional electoral cycle in Nigeria. Like other off-cycle elections, Anambra presented a learning opportunity for the Independent National Electoral Commission (INEC), to test-run some of its innovations in elections administration and assess their effectiveness in promoting electoral integrity.

Scheduled to hold on November 6, 2021, the election came amidst peculiar political and security circumstances which further demanded a review of the strategy for engagement for the elections. The preelection context also posed a major challenge to the work of the electoral commission with the attacks on the INECs offices. The disturbing trend of attacks on the offices and facilities of the INEC with at least 41 INEC offices across 15 states, attacked, vandalized, or set ablaze within months leading to the elections, with most of the attacks orchestrated by hoodlums and unknown gunmen. This was not different in Anambra State. In the wake of 2021, INEC revealed that its offices and structures had been attacked and some vandalized with 44 attacks witnessed between 2019 and 2021.

Beyond the attacks on INEC facilities was the apparent threat by the separatist/secessionist group, Independent People of Biafra (IPOB) who had not only enforced their power in the states in the south-east but had also tested their strength with the imposition of a sit-athome-order. The violence deployed with the enforcement of the sit at home order has not only created an atmosphere of fear amongst citizens who are forced to stay at home on Mondays or any other day marked as a compulsory stay at home day. It has further deepened the mistrust in the capacity of security agencies who have so far been unable to adequately protect lives and properties from attack and destruction or to quell the activities of the IPOB group/supporters.

In addition, the Anambra governorship election was coming barely 13 months after the #EndSARS protest against police brutality which rocked most parts of the country, especially the southern region. Anambra state was trending during the protest with its streets occupied by protesters because of the reported atrocities by Special Anti-Robbery Squad (SARS) operatives in Awkuzu. Post the street protest, there was palpable anxiety and high expectations from citizens to reactivate their citizenship. The protests were followed by agitation for the commencement of Continuous Voters Registration to enable citizens to get registered ahead of upcoming elections.

However, the election may not have been met with the same gusto as other significant events that seemingly overwhelmed eligible voters. The election was indeed projected to be conducted in unusual circumstances that
extended beyond the usual political context and electoral violence threat to deep-rooted issues on violent extremism, identity, citizenstrust and the Nigerian state. The November 6th, 2021 election hugely tested the resolve of the Independent National Electoral Commission, Nigerian Police, Civil Society Organizations and Political parties amidst the prevailing atmosphere of various insecurity dynamics.

The context informed Yiaga Africa, Watching the Vote deployment for the election. The observation findings through the electoral cycle further revealed the opportunities for reforms in the electoral process that goes beyond a new Electoral Act to reforms in INEC processes and systems. The learnings from November 6, 2021, Anambra Governorship election emphasize the importance of a multi stakeholder collaborative action to ensure the integrity of elections in Nigeria. Yiaga Africa’s Watching the Vote hereby recommends: